A day-in-the-life of a Mini-Documentary Maker

At age 6, Christoph Helms announced to his parents that he would either become an astronaut or a cameraman. Spoiler alert! He’s not doing space walks on the ISS these days, but even so, life has turned out to be pretty exciting. As director of photography for Timeframe Films in Vancouver, the 36-year-old from Germany is making his childhood fantasy come true. Working on unique, slice-of-life style documentary films, corporate videos and commercials while living out his passion for carving snow in the peaks around British Columbia.

Christoph grew up near Hamburg and moved to Paris at the age of 15. He graduated from the German School of Paris and then went on to study media design at the Bauhaus University in Weimar. There, he specialized in cinematography for documentaries and short narrative films. The media program at the university gives students the opportunity to work on cross-disciplinary projects with other departments. So Helms had the chance to develop a broad art direction style working with architects, product designers and painters. He then took his career on the road, travelling to Sydney, Australia and San Francisco, USA where he explored the craft of documentary film making. Honing his cinematic eye and sharpening his storytelling skills. 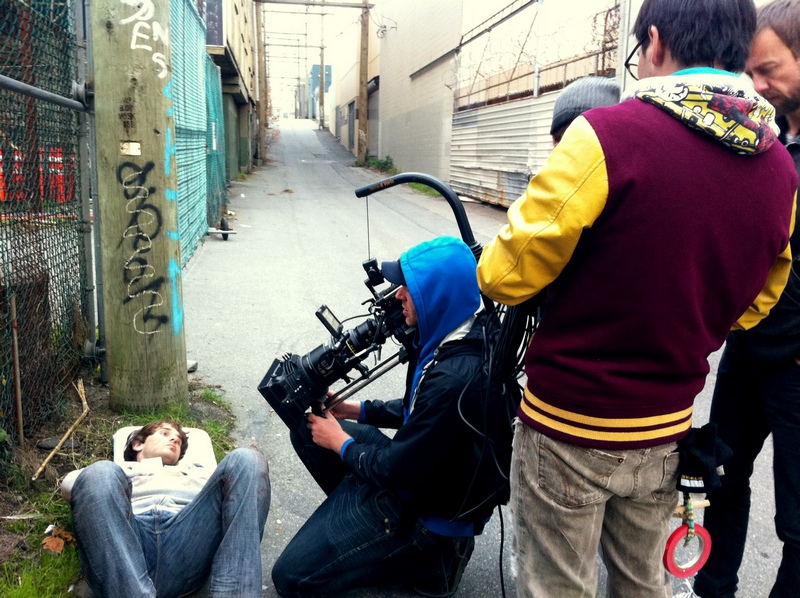 In 2013 Helms moved to Vancouver, "What brought me here is my passion for snowboarding and the film industry." He says, "I visited Vancouver over a weekend and instantly fell in love with the city. I guess it's weird, most people would love it to be always summer but I appreciated Vancouver’s rainy and cold climate."

His production company, Timeframe Films, specializes in telling "Day In TheLife" stories. These mini-documentaries capture candid slices of reality covering a range of businesses and professions. He’s worked with everything from the likes of Safeway, A&W and Red Bull to charitable organizations and hospitals.

Christoph explains, "We approach each story from a cinematic point of view. We ask, how we can tell these stories and be as authentic and true to the nature of the subject as it can be and still tell it in an appealing cinematographic style?"

We asked Christoph if there’s anything unusual about the work he does.

"Unusual in the way that you find yourself hanging out of a helicopter at -40 degree Celsius in the winter in Quebec?" He asks, dryly.

For any other job, yes! That would be out of the ordinary. However, if there’s anything we’ve learned about Neat Video users, dangling from moving vehicles in far-flung vistas is often all in a day’s work. Like many, it’s the artistic storytelling angle that really gets Christoph excited.

"For me the unusual thing about my work is that every project requires a unique approach, so no shoot is alike in a way. The biggest challenge for us is time. When you capture an interesting story, it often takes a while for the subject to warm up to being around a camera. Or let's say the weather isn’t right for day. Sometimes you plan to capture it all within a day just to find out later that the story would be better if you had had more time."

It’s true, time is one variable that makes a complex job that much harder. When the clock is ticking, mistakes are more likely. When that happens, digital noise is often the spectre waiting for you back in the edit suite.

"Neat Video for us is quality control," says Helms. "We are shooting with a lot of different cameras. A typical project has footage from a Sony FS7, a Sony a7s Mk II, a Gopro and the DJI Mavic drone. Not only do the small sensor action cameras suffer from noisy shadows but the FS7 also has tendency to get very noisy in the darker areas of the picture."

At Neat Video we have often talked about the tendency for in-camera noise reduction to do more damage than good. In fact, we recommend turning off internal NR if possible. Christoph has also picked this up and has a useful tip to share when working with the DJI Mavic.

"Recently, we started shooting on the DJI Mavic with +1 on sharpness. It seems counterintuitive, but this step will disable the internal noise reduction. We use Neat Video’s noise reduction as the last step in our post-production chain, which is far superior to anything the little drone could do internally."

To us, there’s nothing better than a user who develops a total understanding of the interplay of operator, hardware and software, to extract every last improvement in noise reduction. In our experience, it’s people like Christoph who consistently achieve the best results.

What now for Christoph?

"When I was around six years old, I announced to my parents that one day I will either become a cameraman or an astronaut. I’m happy that at least one of my dreams has become reality," he says. "Our goal now is to continue to create awesome content with awesome clients. Videos we will be proud to share with our peers. I know this sounds generic, but that’s the truth."

To us, that sounds like something worth shooting for. Good luck, Christoph. We’ll be watching.